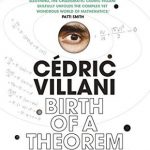 Birth of a Theorem: A Mathematical Adventure

Birth of a Theorem: A Mathematical Adventure

What goes on inside the mind of a rock-star mathematician? Where does inspiration come from?

With a storyteller’s gift, Cédric Villani takes us on a mesmerising journey as he wrestles with a new theorem that will win him the most coveted prize in mathematics. Along the way he encounters obstacles and setbacks, losses of faith and even brushes with madness. His story is one of courage and partnership, doubt and anxiety, elation and despair.

We discover how it feels to be obsessed by a theorem during your child’s cello practise and throughout your dreams, why appreciating maths is a bit like watching an episode of Columbo, and how sometimes inspiration only comes from locking yourself away in a dark room to think. Blending science with history, biography with myth, Villani conjures up an inimitable cast of characters including the omnipresent Einstein, mad genius Kurt Godel, and Villani’s personal hero, John Nash.

Birth of a Theorem combines passion and imagination to take us on a fantastical adventure through the beautiful, mysterious world of mathematics.

Maths has never seemed so magical or so exciting.