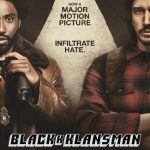 View cart “Black Klansman: Race, Hate, and the Undercover Investigation of a Lifetime” has been added to your cart.