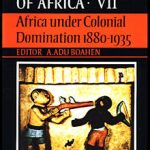 Volume VII of the UNESCO General History of Africa examines the period of partition, conquest and occupation from the beginning of the ‘European Scramble for Africa’ to the Italian fascist invasion of Ethiopia in 1935. Throughout the volume, the focus is directed towards the responses of Africans themselves to the challenge of colonialism.

The first two chapters survey African attitudes and readiness on the eye of the colonial era, and the background to European imperial ambitions. The next seven chapters discuss African initiatives and reactions in the face of partition and conquest up to the First World War. A general overview is followed by more detailed regional analyses.

Chapters 13 to 21 concern the impact of economic and social aspects of colonial systems in Africa from 1919 until 1935: the operation of the colonial economy in the former French, Belgian, Portuguese and British zones and North Africa; the emergence of new social structures and demographic patterns and the role of religion and the arts in Africa during the colonial period. The final section traces the growth of anti-colonial movements, the strengthening of African political nationalism and the interaction between black Africa and blacks of the New World. Liberia and Ethiopia are discussed in special chapters.

Each chapter is illustrated with black and white photographs, maps and figures. The text is fully annotated and there is an extensive bibliography of works relating to the period.