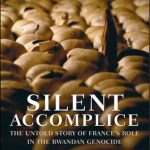 The massacre of 1 million Rwandan Tutsis by ethnic Hutus in 1994 has become a symbol of the international community’s helplessness in the face of human rights atrocities. It is assumed that the West was well-intentioned, but ultimately ineffectual. But as Andrew Wallis reveals in this shocking book, one country – France – was secretly providing military, financial and diplomatic support to the genocidaires all along. Based on new interviews with key players and eye-witnesses, and previously unreleased documents, Wallis’s’ book tells a story which many have suspected, but never seen set out before. France, Wallis discovers, was keen to defend its influence in Africa, even if it meant complicity in genocide, for as French President Francois Mitterrand once said: “in countries like that, genocide is not so important”. Wallis’s riveting expose of the French role in one of the darkest chapters of human history will provoke furious debate, denials, and outrage.