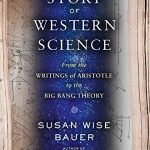 Story of Western Science: From the Writings of Aristotle to the Big Bang Theory

Story of Western Science: From the Writings of Aristotle to the Big Bang Theory

Far too often, issues based on science are decided by voters and politicians who have received their science secondhand. The Story of Science guides us back to the original texts that have changed the way we think about our world, our cosmos, and ourselves. Whether referenced individually or read together as the narrative of Western scientific development, the book s twenty-eight succinct chapters lead readers from the first science texts by Hippocrates, Plato, and Aristotle through twentieth-century classics in biology, physics, and cosmology, including works by Einstein, Schrodinger, and Dawkins. Each chapter recommends one or more classic books and provides an entertaining account of the discovery, a vivid sketch of the scientist-writer, and a clear explanation of any technical issues. The Story of Science reveals science to be a human pursuit an essential, often deeply personal, sometimes flawed, frequently brilliant way of understanding the world.”