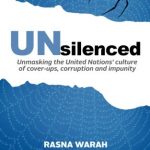 In a world experiencing increasing conflicts, terrorism and displacement, many people are wondering what the United Nations – the organization established in 1945 to save future generations from the scourge of war – should or could have done to prevent these disasters from escalating. Unsilenced shows that, in fact, the Un has remained a bystander in many of these conflicts and that peace-building efforts have not only been undermined by the five permanent members of the Un Security Council, but also by the Un’s many agencies and programmes. The book exposes how, under the guise of development, stability and the “war on terror”, the Un fails to prevent conflicts in many parts of the world, and in some cases, misleads the public about the scale of a problem. The book also reveals the web of lies, cover-ups, corruption and impunity within the United Nations that has allowed wrongdoing to continue unabated. Many of these acts of wrongdoing occur or continue because the Un fails to protect whistleblowers; on the contrary, most Un whistleblowers experience severe retaliation. Unsilenced describes how whistleblowers have been denied justice within the Un system and how the immunity accorded to Un officials and the conflict of interest inherent in the Un’s internal justice system allow the perpetrators of criminal or unethical activities to go unpunished. The book is an urgent call for a serious reform of this bureaucratic, arcane and increasingly politicized organization – because not doing so constitutes a betrayal of the trust invested in it by the people and countries that depend on it.