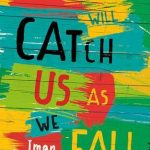 Growing up in the Nairobi of the 90s, a seething boiling pot of racial tension and conflicting cultural taboos, Leena and Jai are raised to believe in a Kenya full of possibility and potential. But as they come of age and venture into a world of underground activists beyond the confines of their tight-knit East Asian community and closely guarded, gated compound, they start to see a country divided by deep ethnic allegiances and on the brink of something very sinister. Soon Leena and Jai find themselves entangled in a shady world of crooked policemen, seedy salesmen, prostitutes, and bohemian artists. As the city tightens its grip, so begins a dangerous game of corruption and conspiracy, where rebellions simmer, and a tangled web of power unravels as dark forces collide and disturbing revelations surface.

A powerful tale of love and politics in contemporary Nairobi, Who Will Catch Us As We Fall depicts a Kenya on the cusp of change in all its complexity. Through two of the most memorable and remarkable characters in contemporary African fiction, Iman Verjee has penned a moving portrait of a family torn apart by national politics and prejudice, yet still painfully tethered together.