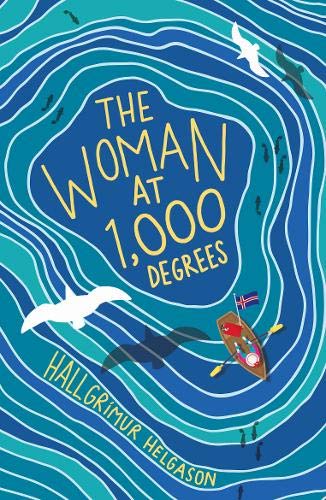 ‘I live here alone in a garage, together with a laptop and an old hand grenade. It’s pretty cosy.’

And…she’s off. Eighty-year-old Herra Björnsson lies alone in her garage waiting to die. One of the most original narrators in literary history, she takes readers with her on a dazzling ride of a novel as she reflects – in a voice by turns darkly funny, bawdy, poignant, and always, always smart – on the mishaps, tragedies and turns of luck that shaped her life.

Born into a prominent political family, Herra’s idyllic childhood in the islands of western Iceland was brought to an abrupt end when her father foolishly cast his lot with a Hitler on the rise. Separated from her mother, and with her father away at war, she finds herself abandoned and alone in war-torn Germany, relying on her wits and occasional good fortune to survive. Now, with death approaching, forced to hack into her sons’ emails to have any contact with them at all, Herra decides to take control of her destiny and sets a date for her own cremation – at a temperature of 1,000 degrees.

In this international bestseller, Hallgrímur Helgason invites readers on a journey that is as hilarious as it is heartbreaking, and which ultimately tells the deeply moving story of a woman swept up by the forces of history.